I had no idea what I had done to make him hate me but I'd always tried not to let him bother me. And usually that was easy enough to do, but not this time. This was very different, because he had never spoken to me like this before. No one had. Before I had fallen ill, I had, for the most part, been treated how a prince should be treated, with respect, dignity and awe. As a sick prince I had become a patient, someone to scold for not taking his medicine, someone to prod and poke, to strip and wash, without any regard for my embarrassment, someone who wasn't even worth talking to, as most of my healers spoke about me over my head as though I wasn't there.

Now it seemed I was less than that. Now I was nothing, a no one, and Davn felt he could talk to me however he wished. 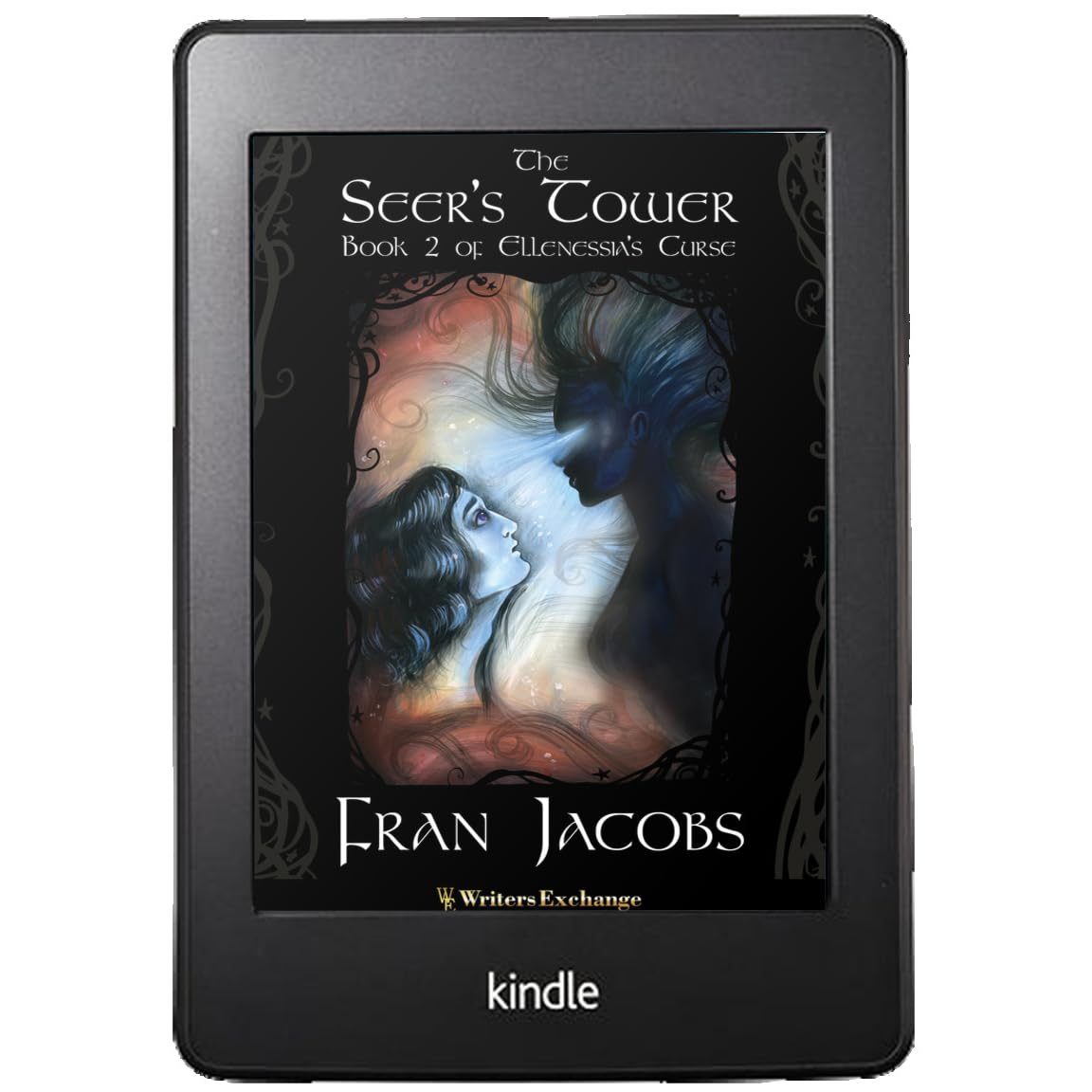 Davn walked away from me and picked up my silver framed hand-mirror from the top of my dressing table. He returned and held it up in front of me. See why they argue so much and why you have to stay in your room, out of the way, so no one has to see what you look like now. I couldn't hold up the heavy weight of the silver frame so, with a muttered oath, Davn took it from me and moved it closer to my face. I blinked and then I found myself staring at a face I barely recognised.

When I had been well, my dark hair had been thick and inky, with loose curls, like my mother's, and it had hung down to brush my shoulders and frame my face. My eyes, large and violet, had been bright, and with my pointed chin, my face had been somewhat feline in appearance. I had been told that I was rather attractive, although I had never had much reason to think about the way that I looked at all. But now the changes were so drastic I barely recognised myself. My hair was limp and dull with grease, it even felt thinner as it rested against my head and it no longer curled so wildly around my face, just stuck there.

There were shadows around my bloodshot eyes, and they appeared dark and empty, not violet anymore, just a flat, muddy colour. My lips were white, almost colourless, and my cheeks were sunken, showing up my high cheekbones even more drastically. My pale skin, which used to burn easily in the summer if I went out and about for too long uncovered, was now a sickly unhealthy colour, almost yellow in hue. There was a thin, patchy layer of youthful beard on my face, which was neither full nor healthy.

I looked like the living skeleton that Aylara had called me. I had thought she was just teasing me but now I knew that she hadn't been. I looked terrible. I looked as though I was already dead.

I touched my face gently with my fingers, feeling the bones, the sunken cheeks, and then I saw what my illness had done to my hands. I had seen them before, of course, seen my whole body when the healers washed me, only I hadn't stopped to think anything of it. Now that Davn had drawn my attention to it, I noticed them. My hands were thin, the skin was nearly translucent and I could see the bones and the tendons beneath.

They looked delicate, as though the skin was just wispy yellow paper wrapped around my fragile skeleton. I had always been slim, but now I was wasted. Tears started to run down my face. They wish that they had someone stronger to call their own, not a boy prone to fits, not a boy who is now wasting away, not a boy who just left his room and showed the whole castle how sick and wasted he really is!

They love you, but only because they have to. I longed to yell at him, to tell him that this wasn't true, but I couldn't. Fear had gripped me. What if this was true? What if this was the way that my own father was talking about me behind my back? And my grandfather, the man who had taught me to ride, who had given me my first horse, who came to see me as often as he could while I lay sick, and secretly brought me sweet cakes and biscuits from the kitchen.

What if he secretly resented me, too, and spoke about me, like that, to others? I couldn't stand that. They want you to die and it would be easier on everyone if you did, instead of dragging it out like this. Davn saw this as our last meeting, the one before I died, and because of that he felt that he had nothing to lose by speaking freely to me.

But I was damned if I was going to lie back and let him. I struggled upright and Davn stood there, with his arms folded across his chest, watching me. He was almost amused by my struggles, by my gasps of pain and the sweat that beaded my forehead, ran down my face, and started to soak my nightshirt. Sitting upright was costing me more strength than anything should, but I was determined.

And finally, when I was upright, I lifted my eyes to meet his. I am a prince. I am Sorron's grandson and you will respect me, or I will have you flogged. Davn just stared at me and for a moment I feared that he wouldn't do as I'd asked and I knew I wouldn't be able to force him.

Even when I had been well, I hadn't had the strength, physically or mentally, to make this man do anything that I asked, and I was far from well now. But he took the mirror from me, his eyes spitting with anger and there was a hard line to his shoulders that was his rage barely held in check.

I feared that, perhaps, if I were well, he might have actually hit me. Davn turned away, set my mirror down onto the table with over-exaggerated care and then he left my rooms. The bedroom door slammed shut behind him and, with a gasp, I collapsed back against the pillows and started to cry. I wept for a really long time. My body shook with sobs beyond my control, and the pain I felt, deep inside my stomach, seemed endless, a giant hole that threatened to swallow me. I was going to die.

I knew it. I had feared it, and thought it, and considered it, as I lay in my room at night, unable to sleep. I had believed it and, yet, it hadn't seemed real to me, but now that I had seen my face in the mirror, seen the ravages that my illness had done to me, I knew I was going to die. I was going to wither away to nothing, if I could, indeed, wither away anymore. I was going to slowly rot, lying in this red-draped bed, with the smell of my own illness and rotting flesh in my nose. I was never going to see another winter. Never make a snowman, or throw balls of snow at my sister and Kal.

I wasn't even going to go to the Summer Dance, the annual ball that marked the end of the summer, dressed in the black breeches embroidered with silver, and the tight fitting violet doublet that I had ordered from the tailor during the early stages of my illness when I had still thought that I would get well again. I doubted it would even fit me now, I was so thin. They would probably bury me in it. I hiccupped miserably. I was going to die here and there was nothing that I could do.

When arms encircled me, I was surprised, and then I was eased against a strong set of shoulders. The arms around me were warm and tight and I felt crushed and lost and yet, so safe, caught up in this stronger grip.


I felt soft velvet beneath my fingers. It was my grandfather, King Sorron, dressed as he always was, in blue, to match his eyes. It was what had given him the nickname of 'the Sky King'.

I hadn't seen him in three days--affairs of state always kept him so busy--and I had missed him, but I hadn't ever wanted him to see me like this. But now he was here, with his arms around me, and I could smell that familiar scent of his and feel his grey, shoulder length hair brushing against my face, I couldn't stop myself from crying. I rubbed my eyes and nose on the sleeve of my nightshirt with a heavy, numb arm. Sorron frowned at me and produced a soft handkerchief, edged in expensive white lace, from one of his pockets. What did you do? I loved being outside, but He had me brought in.

Your father listens to the healers too much when they say that you must stay in bed, with the windows closed, but I had my doubts, as what they recommended didn't seem to be helping you very much.


When Aylara came to me with her request to take you outside, I agreed to it because I knew how much you wanted it yourself. I didn't think it would hurt to try something different. I'm only sorry it ended like this. Sorron turned to look at me sharply, spilling the water down the side of the glass. He barely seemed to notice. I don't even look like myself anymore. I drank slowly, trying not to spill it as I had earlier, not wanting to embarrass myself any further before my king, only I doubted that Sorron noticed.